When Inflation and Charities Collide

The following article is an opinion piece by Ian Chesham, a Director in our Charities team, ahead of October’s Charity Finance Summit. Please note: The article does not constitute investment advice.

The tail-end of the pandemic shows just how far we’ve come since COVID-19 first erupted around the world. However, it also brings new challenges with it that require a different approach.

Having caused peak panic in financial markets in early 2020, the fast-spreading virus triggered a central bank spending spree on a scale never before seen. One IMF estimate puts total spending at $16 trillion, after policy makers collectively rushed to keep the global economy afloat.

If quantity was the saviour at the start of the pandemic, it’s delicacy that many investors now think should be top of the list. Central banks need to juggle how to reign back spending, with keeping the economic recovery on track. Front-and-centre of their thoughts, is the re-emergence of inflation after a near decade-long absence.

The ‘coiled spring’ analogy is perhaps a good one when reflecting on the aftermath of widespread lockdowns. With nowhere to go, consumers accumulated excess savings of nearly $5.4 trillion, according to credit rating agency Moody's.

The re-opening of societies caused a surge in demand for goods and services from cash-rich shoppers. It also renewed the global appetite for commodities, offsetting the balance between demand and supply, and leading to the fastest price rise in a decade for manufacturers (source: Office for National Statistics).

At the time of writing, 2021 has recorded the strongest economic recovery since any recession for 80 years. While the bounce back was initially robust, it has also been uneven, and there’s a similar picture of unevenness emerging when it comes to inflation.

Having risen to 5.3 % in the 12 months to the end of August in the US, there are now signs that it is moderating in the world’s largest economy. Yet a glance closer to home shows the opposite to be the case, with UK inflation now forecasted by the Bank of England to peak at 4% this winter. That’s up from 0.4% only 6 months ago. 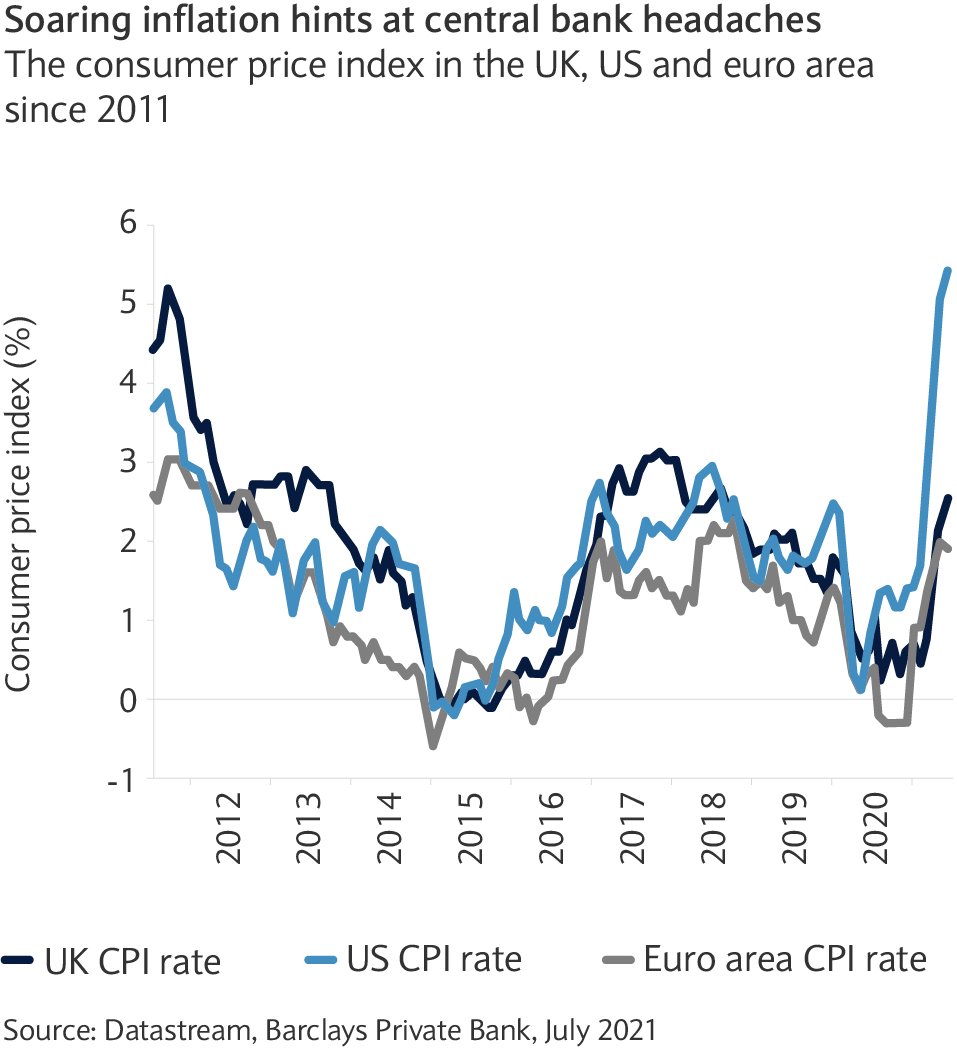 What’s the impact on charities?

Needless-to-say, charities aren’t immune when the price of goods and services rise elsewhere.

As well as putting more pressure on how far donations can stretch, inflation can strain a charity’s income and operating model. As an example, staff might expect inflation-adjusted compensation reviews in reaction to their rising cost of living.

A charity’s cash reserves have typically been generating an interest below that of inflation for over 5 years. This issue is exacerbated with higher levels of inflation and means a charity suffers an even more significant depletion of cash value in real terms.

What’s the impact on investors?

Broadly speaking, there are two ways inflation can impact equities. Firstly, while companies’ revenues should increase following higher selling prices, the result on profits could be negative if input costs rise faster.

Secondly, there’s an interest rate risk to consider. If inflation is accompanied by higher real bond yields, the discount rate applied to future cash flows will increase, compressing valuations (all else being equal).

Can charities do anything about it?

Communication is key and having open and regular conversations with investment managers is often recommended for charities, in both good and bad times.

It is important for Trustees to ensure they’re making available cash reserves work hard – whether in terms of maximising risk-adjusted returns, or as a way of proactively engaging stakeholders about the impact of any sustainably invested funds.

The reserves are there to deliver on multiple fronts and by regularly reviewing treasury and investment policies, Trustees can see if assets are being utilised to their fullest, whilst providing the flexibility that a more volatile and demanding world requires.

Even before inflation picked up earlier this year, we were increasingly seeing charities use their assets in a more flexible way and taking advantage of their available pool of capital. As an example, the ability to lend against investments can give a charity the confidence that they have short-term emergency funds, as well as accessible lending for future projects.

It remains to be seen how long this period of inflation will last, and our base case scenario up-to-now has been that it’s transitory. We envisage post-lockdown demand to abate eventually, while the longer-term, secular drivers of deflationary pressures, such as digitalisation and technology advancement, remain intact and should continue to lower input costs.

In the post-pandemic world that is emerging, it’s vital for charities to continue to evolve and adapt, if they are to survive and ideally, to flourish. Inflation is certainly one trend that puts this sharply into perspective.