The Importance of Reserves to the Charity Sector

Recent research indicates that the majority of charities only have reserves policies based on 3 – 6 months of operating costs.  The problem with this is that this type of calculation does not take into account the different types of income or expenditure a particular charity has. Nor does it take into account of any element of risk.

In its guidance CC19, the Commission states that “Reserves are that part of a charity’s unrestricted funds that is freely available to spend on any of the charity’s purposes. The starting point for calculating the amount of reserves held is therefore the amount of unrestricted funds held by a charity. However, some or all of the unrestricted funds of a charity may not be readily available for spending. This is because spending those funds may adversely impact on the charity’s ability to deliver its aims.” but in a review last year of the reserves policies of large charities the Commission found that less than a quarter of larger charities accurately reported the level of financial reserves they hold in their trustees’ annual report.

This is important because. in the words of the Charity Commission “A reserves policy explains to existing and potential funders, donors, beneficiaries and other stakeholders why a charity is holding a particular amount of reserves. A good reserves policy gives confidence to stakeholders that the charity’s finances are being properly managed and will also provide an indicator of future funding needs and its overall resilience.”

How to calculate reserves

Firstly “Does the charity need reserves?” The graphic below should help address this question to some extent. If the charity has a high fixed cost base and unpredictable income then it will probably need more free reserves than for example a charity with no staff members and regular predictable income.

It is also prudent to know the minimum level of reserves the charity would need should the worst happen and it needed to close. This would include redundancy costs plus other items, eg any payment for notice periods on contracts etc.

Once a minimum level has been ascertained, then a review of the income is required, I would recommend a risk-based analysis. taking into account the amount of each item of income, the certainty/predictability of it and its longevity.    Developing a matrix ranking items 1 to 5 on each of these factors. (See below) 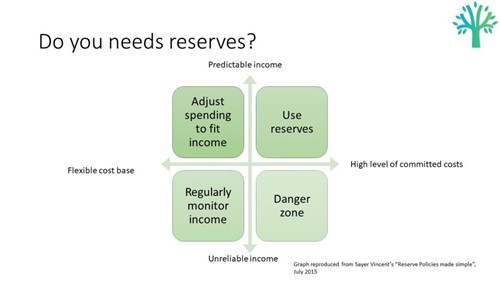 If the charity has a large amount of income that is not certain and is short term but the costs are fixed and high then there may be a problem.

Undertaking the above tests will assist establish the reserve levels unique to the charity.

The key going forward is to review this at least annually as part of the budget processes to ensure that it always reflects the true picture of the charity.